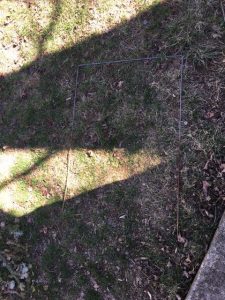 There’s something about stories with foretold deaths that provides relief.  You know death is on its way.  You don’t have to fret about the “ifs,” just the how, when, and where.  Death of a Salesman, Crónica de una muerte anunciada, and La voz dormida each in its own way announces its formula and then still enraptures.

Back in September we picked up the blue and white Clinton-Kaine-Degner yard sign with its cheerful outline of the state of Virginia.  Full of hope, we planted the sign by the curb for the speeding drivers on our cut-through street to see.  The sign looked lonely.  No one else on the street had yet put theirs up, and everyone could do the accounting and conclude that the sign would not enjoy the same success that its Obama-Biden predecessor had had.  No matter.  My little family went about our business, waiting for November results.  Other Clinton-Kaine-Degner signs eventually dotted the street, like little clouds of blue that couldn’t decide whether to billow away or turn into a bona fide storm.

One afternoon a week before the election, children from the middle school around the corner were trekking home from school.  I’m used to their pubescent awkwardness—the cliques, greasy hair, cakey make-up, tension between yelling insults and flirting, their firing the “F” bomb without the linguistic expertise they will gain with practice.  I’m often charmed by all the awkwardness.  What an odd stage of life it is, and it’s one that I think we experience again in our 40’s, whether or not we recognize it.  (Symptoms include:  hair loss, fat pockets in new places, creakier joints, shifting familial responsibilities and alliances.)

On that particular November afternoon, the passing children had gathered rocks of substantial size.  I only realized they had the rocks when I could hear pings and clangs from the Clinton-Kaine-Degner sign.  The sign groaned a little under this middle-school assault, losing some of its upstanding dignity and ending up a bit askew.  But no matter.  It was fine, and middle schoolers are, well, middle schoolers.  Who at 13 hasn’t thrown a rock at something?

On November 9th the yard sign looked up at me in stony silence, asking for mercy. Loneliness and pelted rocks hadn’t killed it, but certainly death from election loss and devastation was imminent.  It just had to be.  Come on, woman at her computer with her stacks of books and her candles burning novenas, come get me, it croaked.  End this.  I was stubborn, though.  It wasn’t yet time to commit euthanasia or call the preacher.  After all, there were still votes to count in Michigan and Wisconsin. There were still 10 more weeks of the imperfect but almost holy by comparison Obama-Biden connection.

Three weeks later the sky did turn into a driving storm with fast-moving clouds, inches of rain, everything gray, gray, gray.  I looked down from the window at the yard sign, soaking wet, still standing.  Okay, I thought, it’s time.  Mercy has come.  Out to the front yard I went, ready to lift the sign out of its hole and place it into a more permanent one.  As chance would have it, I was unable to get the post out of the ground.  It seemed to have grown long roots and an odd tenacity.  I tried again, shimmying closer to the ground and using more bicep and tricep power to remove it.  No go.  Well, well, old sign, I thought, looks like you’ll be staying here through the street’s holiday season.  And so it went.

During those weeks I saw plenty of signs that could easily have turned me into a middle schooler.  The oversized Trump-Pence signs that had overtaken many a lawn remained.  Trump-Pence bumper stickers still stuck it to me from their big-wheeled, high-riding vantage point.  The gigantic, all caps “Lock Her Up” sign was still nailed to a barn visible from the highway on the way into town.  Confederate flags prepared to celebrate Martin Luther King Day.  I didn’t pick up a rock, throw a stone, or so much as kick a pebble.  (I did let my dog poop near a Confederate flag and then didn’t pick up the poop.  Okay, so that’s how I stooped. Damned 13-year-old instinct.)

The holiday season came and went, with the trees and wreaths and lights going with it.  Clinton-Kaine-Degner stood strong through a sideways snowstorm and pitying looks from passersby.  Yard sign became talisman as Inauguration Day approached.  Maybe if the sign just held on in its smart, stubborn Ruth Bader Ginsburg fashion, then democracy could hold on too?

Yard sign seemed to wake up with us at 4:30 the morning of the Women’s March.  March well, yard sign called to us.  I’ll just hang out here and see you when you get back.  In the end, we and yard sign stood, rather than marched, in defiance.  Yard sign, alone, we with half a million pissed-off, creative people bearing their own signs, an explosion of rage and color and peace offerings.

It was almost as if yard sign knew it was time to let go when Ruth Bader Ginsburg came to town.  Throngs went to hear the Notorious RBG speak about her 20 push-ups a day, the co-education decision at the Virginia Military Institute, and her affection for the now-deceased Scalia.  When I arrived home from the talk, I almost gasped to see a metal post without its candidates, without its jagged, chalked peaks, without its blue and white sky.  The sign has died, yard sign has finally died, I whispered.