(Poster made by Sophie Waller)

People all over the United States, including those of us in Virginia’s 6th District (for the U.S. Congress), are usually quite busy at 6:49pm.  There are dinners to make, the elderly to look in on, children to get to activities and to feed, bathe, and get to bed.   Some of us are still at work or headed out to work.  That’s why many of us did not receive Congressman Bob Goodlatte’s automated invitation to his “telephone town hall meeting” until well into the call, which began at 7:00pm, eleven minutes after the message was left.  Here’s the message Goodlatte left:

“Hi.  This is Congressman Bob Goodlatte.  It’s Thursday evening and I was calling to invite you to participate in a live, telephone town meeting to hear from you about issues before Congress.  I regret that I missed you.  If the call is still in progress, you can join by calling {#}.  Otherwise, if I may be of assistance to you, please contact my Roanoke office at {#} or my Lynchburg office at {#}.  Also, if you’d like to receive important updates from my office, I encourage you to sign up to receive. {message cuts off}.”

I’m sure you’ve heard of fake news and falsehoods.  Goodlatte’s desperate telephone call was filled with fake concern and scripts from the ever-more-false Republican party line.

By the time I called in, I had missed about the first 17 minutes of the conversation.  It turns out, though, that 43 minutes of insensitive responses to individuals genuinely concerned about social security benefits, Medicare cuts, the proposed decimation of the Environmental Protection Agency, and the executive branch’s dangerous cover-up of its multiple links to Russia and cybersecurity threats was plenty of time.  In fact, Congressman Goodlatte uses the telephone to good advantage.  He tightly controls the medium by accepting a limited number of calls, reading from pre-packaged GOP scripts, and channeling all potentially troublesome questions into reassurances about how he is taking care of the safety and security of good United States citizens.  It becomes rather easy for listeners on the call to guess who are the bad U.S. citizens.

Those of us on the call could compare real concern in the voices of real human beings with the artificially concerned and overly robotic voice of Congressman Goodlatte.  Goodlatte cares only about Goodlatte.  He checked something off his list tonight.  I can just imagine him rubbing his hands together at 8:01pm and thinking, “Those pesky concerned constituents, check!  Now I can go back to gutting ethics and the ethics office, encouraging racist, Islamophobic travel bans, gutting the EPA, repealing Healthcare, and removing Medicare.”

Of even more rhetorical concern was Goodlatte’s use of two survey questions on the call.  The first asked callers to press “1” if they believed that sanctuary cities should receive federal funding and “2” if they believed they shouldn’t.  When the question was read again a few minutes later, an editorial bit was added:  “Should sanctuary cities—that do not obey executive orders–…”  Maybe Goodlatte didn’t get as many #2’s on the first go-round as he had hoped.  The second survey question asked if Iran and North Korea pose a threat to the United States (press “1” for yes and “2” for no; stay on your toes if you’re a liberal who thinks the correct answer is always “1!”).  Goodlatte’s manipulation of real concerns is disingenuous, mean-spirited, and fearmongering.  I’ve never been one to love surveys because I can never faithfully box my opinions into the limited range of answers.  In this case, I wanted to be able to respond, “Other.  Donald Trump and the sheep who follow him represent the greatest threat to the United States, both here on U.S. soil and abroad.”

You might recall this blog post that was a Theatre of the Absurd rendition of last month’s meeting with Congressman Goodlatte’s employee, or this post that takes Goodlatte to task for his racist support of the travel ban (I wrote that post before I knew of Goodlatte’s office’s involvement in the drafting of the Muslim ban).

This month’s meeting quickly outgrew the meeting space, and so we moved downstairs to our City Council meeting space.   16 people were in attendance last month, 66 this month.  Congressman Goodlatte’s constituents care about what is happening in our district, state, and nation.  His staff member is instructed only to take names and report the issues mentioned by individuals. This morning’s meeting, in which at least 35 people spoke, demonstrated that the citizens in our area are doing their homework.  We study the issues, learn our representatives’ stances and votes, and ask hard questions.  We want a respectful answer to questions thoughtfully posed.

This morning’s 90-minute meeting, with only the ghost of Bob Goodlatte present, went much better than this evening’s Goodlatte telephone call because, it turns out, Bob is a better listener when he’s not there.  People in this morning’s crowd expressed eloquent dismay and outrage over the Muslim ban, general refugee and immigrant rights, our representative’s cavalier disregard for the health of the Virginia environment, the desire to repeal Obamacare without a new and effective plan ready to take its place, and the congressman’s support of removal of federal funding from Planned Parenthood.  Those who spoke made reference to those who had spoken before them, and those in the audience listened carefully, clapping and “hear, hearing” when they felt so moved.

Three items stood out:  (1) concern over Bob Goodlatte’s office staff’s involvement in the drafting of the travel ban; (2) Bob Goodlatte’s lack of regard for and response to his constituents; and (3) the group’s sincere desire to have a face-to-face reckoning with the man who is supposed to represent us but spends most of his time avoiding us.  He is a paid government representative who goes to extreme, expensive measures just to avoid a group of concerned citizens.  As one concerned citizen summed it up, “Bob Goodlatte, obey your oath.  Do your job.” 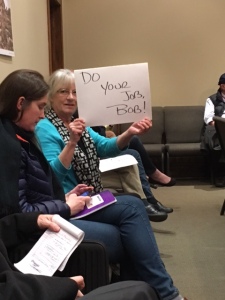 4 thoughts on “Bob Goodlatte Does Nothing Again, Only It’s Worse”