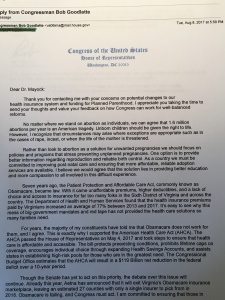 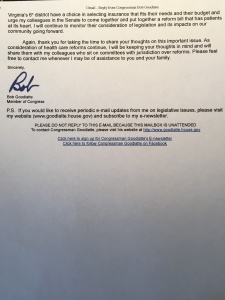 (E-mailed response from Congressman Bob Goodlatte to one of my requests that he support the ACA and Planned Parenthood.  The e-mail reply from Goodlatte arrived in my inbox on Tuesday, August 8, 2017.)

Do you remember your high school and/or college teachers and professors requiring close readings of literary texts?  The kind of close reading for which you summarized the plot or movement of the segment, discerned the principal theme, and examined the rhetorical devices that made the piece a work of art that communicated an idea?  Well, it’s hardly possible to do all that with Bob Goodlatte’s form letter genre, but I’m going to complete here a brief analysis of a Goodlatte letter.

This week, I’m taking a page out of my friend and colleague Chris Gavaler’s blog.  Since December 2016, Chris has written Congressman Bob Goodlatte a letter every day, and all the letters are posted in Gavaler’s “Dear Bob” blog.  This is an amazing undertaking, which has allowed Chris to become extremely well-versed on our regional and national political issues, educate others on what he has learned, and take daily action.  The Goodlatte staffers all know who Chris is, and they have met with him on several occasions.  In his blog, Gavaler often signals the absurdity of Goodlatte’s responses to him. The responses sometimes don’t address at all the issue raised by Chris; sometimes they pretend to address Chris’s question but go in a conveniently different direction; the responses usually reassert Goodlatte’s supposed moral superiority over everybody but Donald Trump, who, for Goodlatte, is a paragon of virtue.  Gene Zitver, also from our area, maintains the “Goodlatte Watch” blog.  The Gender Shrapnel Blog has also  looked at Goodlatte’s political and communication shortcomings in several posts (Theatre of the Absurd; Bob Goodlatte Does Nothing Again, Only it’s Worse; Bob Goodlatte Needs a Better Job Description).

Over the phone, by formal petition and e-mail, and in person with Goodlatte staffers, I (along with a good number of people in my area) have protested many actions taken by the congressman and his party members. These actions include, but are certainly not limited to, refusing to execute duties as Chariman of the House Judiciary to investigate ethics violations of the current “president,” Goodlatte staffers’ composing the Muslim travel ban order, supporting any and all repeal and replace efforts proposed by the GOP, running sham “telephone townhalls,” and never appearing in person at the meetings scheduled by his staffers to meet with constituents throughout the 6th District.  I’ve received many replies from Goodlatte staffers, in both paper and e-mail forms.  They are predictable in their bureaucratic rhetoric, verbosity, and tone of patronizing superiority (a kind of “sit next to me and let me explain a few things to you, little girl” tone).  Sometimes they address the issue I raised; sometimes the letters have nothing to do with the concern I articulated.

Here I offer a close reading, paragraph by paragraph, of the most recent response I got from Congressman Bob Goodlatte.

Salutation: “Dear Dr. Mayock” –Good start!  I do have a Ph.D., but I don’t usually ask people to call me “Dr.”  On the Goodlatte web form, choosing a title is required.  I sometimes choose “Mr.,” sometimes, “Reverend,” sometimes “Dr.”  Just depends on the mood of the day.  I always figure I’ll get a quicker response if my chosen title seems to indicate to Goodlatte and his people that I’m a dude.

Paragraph 1: “Thank you…” I appreciate the polite acknowledgement of my contact with Bob.

Paragraph 2: “No matter where we stand on abortion as individuals, we can agree that 1.6 million abortions per year is an American tragedy…”  I have actually never addressed the abortion question or anti-choice legislation in any of my communications with Goodlatte.  I have only stated that the proposed ACHA would defund Planned Parenthood, which plays a fundamental role in healthcare for underserved communities.  Planned Parenthood does not equal abortion services, but I’m sure glad they exist to provide abortion services when so few other resources are available.  Why?  Bob, come sit by my side, and I’ll share the following reports with you!:

Paragraph 3: “I believe that we would agree that the solution lies in providing better education and more compassion to all involved in this difficult experience.”  Bob, stop assuming you know what I believe.  This rhetoric is bossy and manipulative.  I do not agree with you because abstinence-only education is woefully insufficient and because people don’t want your compassion (again, you’re imposing moral superiority), but rather viable solutions.  The White House has amplified the religious refusal rule, and Congress is working to weaken or completely undo Title X, a major family planning program that includes contraception.  In addition, the global gag rule could soon apply here in the United States as well.  None of this demonstrates one iota of compassion.  These anti-women measures, pushed by all-men bodies, are misguided, shortsighted, and discriminatory.

Paragraph 4: In this paragraph, Goodlatte criticizes the Affordable Care Act, saying, “It’s easy to see why this mess of big-government mandates and red tape has not provided the health care solutions so many families need.”  Actually, Bob, if you had advocated for Medicaid expansion, a fundamental part of the ACA, in Virginia, then there would be far fewer families in need.  You are creating a problem and then blaming it on the ACA and Democrats.  A crafty move, but dishonest at its core, and also absolutely detrimental to hundreds of thousands of Virginians.  Furthermore, hasn’t your party just spent six months and billions of taxpayer dollars to try to pass the shoddy AHCA and its ridiculous offshoots?  That sounds a lot like big government and red tape to me.

Paragraph 5: “For years, the majority of my constituents have told me that Obamacare does not work for them, and I agree.”  Can I please see the data?  I know plenty of constituents who have attempted real contact with you on this issue, who disagree with your assertions, and who are unable to get an audience with you.  You are cherry-picking here, Bob.

Paragraph 6: “I am committed to ensuring that those in Virginia’s 6th district have a choice in selecting insurance that fits their needs and their budget and urge my colleagues in the Senate to come together and put together a reform bill that has patients at its heart.”  Really, Bob, “fits their needs and their budget?”  These do not go together when we are talking about the healthcare and pharmaceutical industries and their powerful lobbying efforts.  Check out this post to see why the AHCA had patients very far from “its heart” and very much in its pocket.

This one sample of the many letters I have received from Congressman Goodlatte reveals the machine behind the man, a machine composed of the GOP’s overreach into people’s personal lives, gaslighting rhetoric, and false concern for real people.  Goodlatte is so busy kissing the “president’s” posterior that there is no way he can actually listen to the people of Virginia’s 6th District.  This is not governance, Bob.  It’s a waste of all of our time and money.