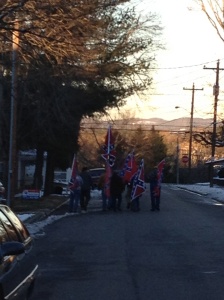 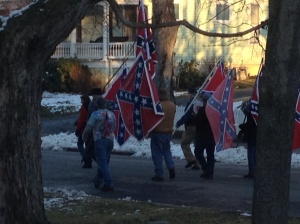 (Photographs of “flaggers” in Lexington, Virginia)

If the events in Charlottesville did nothing else, they made clear to multitudes of people who somehow weren’t yet sure that, since the nation’s inception, we in the United States have created and sustained in overt and covert ways profound systems of oppression—especially of black and brown individuals and communities and Jewish peoples.

The flood of articles, interviews, longer magazine pieces, and more informal posts on social media take our nation, and especially and appropriately white people, to task for ignoring realities and/or taking no action in the face of awareness, and they reveal the many gulfs of levels of belief and understanding between and among us.  Sherman Alexie’s poem “Hymn” speaks beautifully to the sadness and complexities of our current moment; “Renegade Mama” reminds white women that “This is definitely us” (meaning we are complicit in the system of oppression); Ijeoma Oluo’s piece on The Establishment gives practical advice on battling white supremacy; the UVa Graduate Student Coalition published “The Charlottesville Syllabus” to teach us about “the long history of white supremacy in Charlottesville, Va.”; presidents of academic organizations and universities and mayors, congresspeople, and governors have made statements about Charlottesville to condemn white supremacists and their umbrella groups.  This video clip of Toni Morrison on the Charlie Rose Show in 1993 has also recently made the rounds on social media.  Of course, we all know that our oppressor-in-chief was prepared from the very start of his term (and seemingly throughout his life) to support white supremacist groups.

I am a white woman who still has a lot to learn about the history of monuments, the rise of white supremacist groups, and the daily dangers, obstacles, and challenges in the life of people of color living in the United States.  I am writing about Charlottesville this week because I cannot think or write about anything else (except for the additional tragedy of the events in Barcelona and Cambrils), nor can I sleep, nor can I feel safe for friends, oppressed communities, or my own family.  In this blog post I’m going to provide cultural context to my own living situation and then list briefly the major issues that I have seen underscored in the week since white domestic terrorists armed themselves to the teeth, marched triumphantly through various areas of Charlottesville, chanted vile words against African Americans, Jewish people, women, and members of the LGBTQIA+ community, and killed peaceful activist Heather Heyer and injured many more.

I was an undergraduate at the University of Virginia, where I always wondered at the lack of nuance in official discussions about Thomas Jefferson and at the banal insistence on putting a Jefferson quote on every building stone and t-shirt.  For 20 years I have lived in Lexington, Virginia, home to Virginia Military Institute and Washington and Lee University.  Lexington continues to confront its own problematic history of slavery, the Civil War, complicity with Jim Crow laws and culture, civil rights struggles in the 1950s and 60s, and present-day conflicts about what the city does or can represent.  This week there has been discussion here among knowledgeable and generous people of generating a “Lexington Syllabus” to make more transparent the conflicted history of white supremacy in this town.

Washington and Lee University was founded in 1749.  As you can tell by the name, the university was named for its founders, two of the most famous generals (the “Generals” are also the mascot of the university) of United States History.  As president of the school from 1865-70, Robert E. Lee lived on the university campus.  “Lee House” is the name of the presidential residence at W&L.  The university’s chapel is Lee Chapel, in the basement of which you can find the crypt of Lee and several family members.  Even his horse, Traveller, is buried right outside the chapel.  A famous statue of Lee literally occupies center stage in Lee Chapel.  This statue is called “Recumbent Lee,” but I usually call it “Incumbent Lee,” because it feels as if he’s always about to return to the university presidency.  Besides W&L’s numerous reminders of Lee, the town of Lexington boasts the RE Lee Episcopal Church, the Robert E. Lee Hotel and Lee Street.

The university has celebrated Lee as just another one of its presidents.  In 2006, the incoming president of W&L said this about Lee: “Then of course, there is Robert E. Lee, assuming the leadership of Washington College after the Civil War. Offered numerous other opportunities, Lee chose a college presidency because it was the only option that allowed him to help bind the wounds of a divided nation. If the United States was to recover from the devastation and moral wounds of the Civil War, the healing had to begin with education. We build upon the legacy of Lee, the educator, with an ongoing commitment to educating citizens and leaders for a complex world.” (Here is a piece that president wrote almost six years later, more nuanced, but still adopting a rehabilitative view of Lee.)  Ultimately, though, this president did take down the Confederate flags that were displayed on the W&L campus.  If I recall correctly, the university (where I teach) has also sponsored exhibitions and workshops of “Lee the Educator.”  When I interviewed at W&L on a January Monday, the university was celebrating “Founders’ Day” (Washington and Lee), while the rest of the nation celebrated Martin Luther King, Jr., Day.

In the Gender Shrapnel Blog, I’ve written on several occasions about the oppressive nature of civility codes and the problematic silencing of so-called identity politics.  I suspect that this week’s post will be unpopular among some groups of my town and university, but I also think we must face the hypocrisies we continue to foment as we fear airing the dirty laundry of our past and present.  Four years ago, W&L rightly determined that it would publicly reckon with the institution’s slave-owning past.  To do so, the institution placed an historical marker on the side of Robinson Hall on the university’s historic Colonnade to show that donor John Robinson had been the owner of 84 enslaved people and to name those 84 individuals.  This marker was visible from my office window, and I was glad to see even the smallest nod towards understanding that W&L had benefited from the ownership and labor of enslaved peoples.  At the same time, renovation of the entire Colonnade was nearing its end, supported in large part by a big donation from W&L alumnus and former trustee Warren Stephens.  Stephens has been listed as part of the Wall Street fraternity not-so-slyly named Kappa Beta Phi.  In a 2014 article in New York Magazine, Kevin Roose recounts his infiltration of the group’s big annual event, which featured Stephens and his “fraternity brothers” doing skits.  Roose writes, “Warren Stephens, an investment banking CEO, took the stage in a Confederate flag hat and sang a song about the financial crisis, set to the tune of “Dixie.” (“In Wall Street land we’ll take our stand, said Morgan and Goldman. But first we better get some loans, so quick, get to the Fed, man.”).”  This link from the Arkansas Times used to contain a link to the audio of the performance.  As I recall, the New York Magazine piece originally included video coverage of the event, but that has also been removed.  This Salon piece comments on Stephens’ link to the Confederate flag, and extrapolates to a discussion of Wall Street’s ties with the Confederacy.

While the historical marker for 84 enslaved people is found to the side of one of the buildings on W&L’s historic Colonnade, Warren Stephens is honored with not one, but two, rectangular stones, placed right on the Colonnade itself—one at either end of the brick-lined walk.  Stephens frames the Colonnade, and W&L’s enslaved peoples are tucked to the side.  There is still much work to do in terms of the semiotics of remembrance, reckoning, and reconciliation.

One of the Lexington citizens who led the way to make illegal displays of the Confederate flag in public spaces used to own the house I live in.  Groups of “flaggers” still drive by our house every year throughout Martin Luther King Day Weekend and, on occasion, they hop out of their cars, 30-40 women, men, and children abreast, line up by the curb in the front of our house, wave their Confederate flags, and sing “Dixie.”  (See photos of this, above.) They also remark at the “Latinos for Obama,” “End Crooked Districts,” “Safe Space,” and “Take Back the House” bumper stickers on our 21-year-old car.  These are the days we don’t allow our children to walk home from school or go outside without us.

Three days ago, as the town worried about increased activity and potential for violence, especially given the events in Charlottesville, the U.S. “president’s” continued support of white supremacist groups, and our proximity to Charlottesville, I heard myself say to my daughter, “The flaggers are out.  Please be careful after school.”  After I said this, I realized how normal such a statement had become and thought about how that statement must feel more acute and necessary in homes of black and brown residents of our town.

This week my mind has done daily roundtrips between Charlottesville and Lexington.  The major issues that keep popping up include (but are by no means limited to):

-Real violence and real threats of violence being enacted by white domestic terrorists on communities of color and their allies;

-White House cultivation and support of these groups, including Neo-Nazis, Neo-Confederates, and the KKK;

-Discussion of white supremacy, systems of oppression, our nation’s history as the present, and the need for greater awareness and action, especially on the part of white people;

-Awareness of increased tensions for Jewish peoples and women as well;

-The clash between the 1st and 2nd Amendments; how to protect free speech and the right to assembly when weapons of war are used against us;

-Complicated conversations among people on the left, revealing some intersectional and generational splits, or rifts; a recognition of the need for more education, dialogue, and action on the issue of white supremacy.

Our “president” is both a symptom of and a catalyst for oppressive systems that have been in place here in this nation for centuries.  His “vice president” can’t be much better.  Therefore, even an accelerated change in the leadership of the White House to an entirely different administration won’t reduce or eliminate white supremacy.  We citizens have to do it, and we’ll need to do so with a multi-pronged approach.  This should include firmness about the terms we use, the legal implications of the 2nd Amendment and the powerful NRA lobby, the monuments we remove, and the hours we devote.  We also need a heightened understanding of the politics and ethos of non-violent protest.  And we need to show up. The resources are out there.  It’s time to read, learn, and act.

13 thoughts on “Charlottesville (and Lexington)”