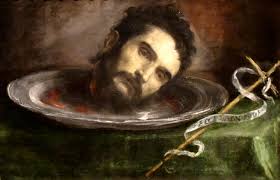 (The Head of Saint John the Baptist, by an anonymous Spanish painter.  Wikimedia Commons.)

I notoriously did not realize the relationship was ending.  Wait, “ending” makes it too progressive.  Over. I notoriously did not realize the relationship was over.  How could it be?  I was still in love.  Love was still so new.  I had delivered my vulnerability, a sign of trust that surely meant love would last.  Friend after friend gave me gentle warning signs: “You know, I think I saw him around town last weekend with someone,” or, “Maybe I saw him out romantically with someone else, I don’t know.”  Oh, no, I thought, that’s impossible.  Because that’s television bullshit.  That’s a bad movie.  People in real life tell each other when they’re moving on.  People in real life understand respect.  In real life, relationships end in straightforward but kind ways because they reflect the respect that has developed right alongside the relationship.  Of course, I’m not being broken up with, because I would know!  Alas.  Four months later, I called the boyfriend (ex-boyfriend of months, I just didn’t know that) to break up with myself on his behalf.  Whew, that felt good.  That was appropriate closure.

I remember over-extrapolating the lessons to be learned, magnifying each moment so that my 21-year-old self could synthesize, analyze, and remedy the one-sided break-up so that my 22-year-old self would never again participate in an unhealthy romantic relationship.  Self, I said, you will always break up with someone in person, and you will always give honest reasons for the break-up.  It turns out that most people with whom I subsequently broke up were mostly uninterested in the “honest reasons,” which included genuinely liking the person but not seeing a romantic future, needing more excitement, needing more time to myself, that kind of thing.  So sure had I been of my lessons learned that I went into debt to fly to Spain to break up in person.  That sent the wrong message, too.  After all, if I was flying all the way to Spain, didn’t that mean I wanted to be with that person?  The melodrama—me staying with friends after the break-up, him staging a drunken, 5am “Yo, Adrienne” moment in the friends’ apartment stairwell—that melodrama, too, was unnecessary.

What did I learn from these experiences and my teacherly tendency to create a lesson out of everything?  (Yes, back then, I even declared that no one should pretend they’re experiencing certain physical sensations in the boudoir that they’re not because it reinforces bad habits. I sure did like to draw conclusions and teach lessons!)  I learned that I am blinded by my own overly-defined moral code, misreading, unreading, or disreading signs and cues and thus neglecting to tune into others’ codes.  I was the Amelia Bedelia of relationships, certain that “drawing the curtains” was an art project and “trimming the tree” a forestry expedition.

Last week, which was the very first week of 2019, smacked me down with such drama that I started to magnify moments and extract lessons.  Experiencing the worst arthritis flare I’ve ever known, I hhhheeeeeeee-ed through spasms of pain in my neck, adopting some kind of Lamaze breathing just to live to the next spasm, feeling like I was supposed to give birth and realizing the only thing born(e) was pain.  I’m not looking for sympathy.  Many of you kind people offer that all the time in a million different lovely ways.  I mostly just need to narrate the pain and evaluate the medical experience.

The pain stabbed vertically and diagonally with such a vengeance and clarity, especially in the middle of the night, that I was suddenly certain there was a god.  But no, I puffed and seethed, if there were a god, the potent being would not be vengeful in this way; this would not be god’s work.  God’s work would be loving, gentle, thoughtful, subtle.  Damn it, this is a vengeful god’s punishment.  No, there is no vengeful god.  And besides, asshole, you don’t believe in god.  Ruminations on faith, spirituality, and religion gave way to a deliverance—the image of my head on a platter, benevolently severed from my neck, which could go screw itself.  I saw my head as that of John the Baptist, served up on a silver platter.  But there was an easy smile on my face, a sense that this break-up between head and body was surely a good thing, the best for both parties, the correct path ahead.  Decapitation might be an extreme form of separation, but, damn, how soothing it could be.

I think you get my state of mind.

In the more lucid moments of the week, I started picking up on the signs that my most excellent rheumatologist was breaking up with me.  How had I not realized this months earlier when, instead of telling me to make an appointment for six months hence, he told me I could make or not make another appointment?  He must have been seeing other patients.  He had given me his cell phone number so that I could text with questions.  Oh, no, now he wasn’t answering the texts.  Questions about tapering from prednisone, approving a standing desk, improving my health in order to stave off more effectively the next flare.  All these questions, previously so carefully addressed and treated, languished in the little green lozenge of a text message.  The rheumatologist and I spoke on the phone one desperate day last week, and, he seemed, well, done with me.

Still heeeeeeing and whewwwwing my sounds of pain, I called again and reached the “rheumatology fellow” of the Department of Rheumatology.  The rheumatology fellow, new in his relationship with me and not yet fed up with unabating pain, offered excellent advice and soothing reassurances that I was doing everything I could.  When the real rheumatologist called the next day, the break-up happened.  “I think it’s time to refer you to a pain clinic.”  Shit, I thought, just the term sounds like sheer torture.  Besides, don’t I still have rheumatoid arthritis that should probably be treated by an expert in the field?  And, if this was a prescribed path, one that ensures treatment by a rheumatologist only up to a certain point, then why didn’t I know that from the beginning?  What are the secrets, the undercover protocols that you only learn about when they’re through?  I’ve never been the stalking type.  No, in fact, the laissez-faire approach to lack of response is much more my way.  I would not stalk the rheumatologist.  There would be no calls to his fellows, no repeat texts, no rabbits.

That’s when I remembered that a dear friend of mine with the same ailments had been summarily broken up with by her doctor who, when my friend had arrived at the end of pain treatment possibilities, said, “There’s nothing more we can do for you.”  Oh.  That is deep, I thought.  This is that moment.  How did I not see this coming?  There is nothing more they can do for me.  That is a freaking wake-up, break-up call if I’ve ever heard one.

In the wake of this, as the pain has abated, my movement has returned, and the lessons start to take shape (as faulty as they may be), I am again startled by my own vulnerability, naïveté, and, let’s be frank, relative isolation on this medical path.

Dr. Melanie Greenberg tells us in Psychology Today that neuroscience links break-up pain to actual physical pain: “Our brains appear to process relationship breakups in the same regions as physical pain. This doesn’t however, mean that romantic rejection causes actual physical pain. Rather, your brain is signaling that both are important events to pay attention to. There may be an evolutionary reason for this. The function of pain is to alert the person to physical danger or harm so she can take protective action. In the animal kingdom, one’s chances of avoiding predators are much higher as part of a group than alone, therefore social rejection may have been an actual threat to physical survival for our early ancestors. If this is the case, it might partially explain how difficult it is for many people to let go of the ex-partner and move on.”

The friends and family members who have warned me that the medical-industrial complex will make it mostly about the pharmaceuticals are right.  As excellent as my rheumatologist is (he explains things; he asks questions and listens to answers; he carefully teaches residents under him about what he is doing and how; uh-oh, I’m backsliding on the break-up), he is wholly uninterested in discussions of diet and exercise, and I suspect that this comes from his training, the same training taking place in outstanding medical schools across our nation.  The friends and family members who are easing me into this break-up have made gentle suggestions to get me on a broader path.  At my ripe old age, I am again realizing that I am my own medical self and my own medical case worker, and I have to do a lot of trial and error off the formal medical protocol track to figure things out.  I’m looking at this not as a new break-up, not as a severing of head from body, but as playing the field.

One thought on “Breaking Up with Pain”