I am writing this short post in sadness and solidarity, and with regard and resolve.

Jesmyn Ward’s 2017 edited collection of essays, The Fire This Time. A New Generation Speaks About Race, is dedicated to Trayvon Martin and includes pieces by Ward, Garnette Cadogan, Edwidge Danticat, Claudia Rankine, Clint Smith, Isabel Wilkerson, and Kevin Young, among many others.  It is no accident that many of the authors who contribute essays “say their names”—the names of black people killed by white people, and in too many cases, by white police officers in the United States.  Trayvon Martin, Tamir Rice, Eric Garner, Sandra Bland, Philando Castile, Atatiana Jefferson, Freddie Gray, Breonna Taylor, Tony McDade, Sean Reed, Ahmaud Arbery, George Floyd, and a frighteningly long etcetera. The authors recognize the flare of anger, the Black Lives Matter chants and protests, the all-too-quick calming, or forgetting, of the public, and the repetition of this violent, racist, never-ending cycle.  When I read the collection (for the 50 Ways Rockbridge Racial Justice book group), I was not surprised by the general physical, intellectual, and spiritual exhaustion that sighed between and behind the lines of each essay, but I was taken by how each author expressed with such patience and humanity their deep frustration and sadness surrounding white power structures in United States institutions. When I write about sexism, misogyny, and intersectional struggles, I rarely manage such grace and eloquence.  And now, in these racist United States, I think that grace and eloquence are fine, and so are impatience and radical change.

Since 50 Ways Rockbridge’s slogan is “Research, Educate, Act,” I will share here some of the resources people have so generously posted on social media and/or that we have used for programming in our area.  I am deeply grateful to my friends and colleagues who are people of color who somehow continue this fight against white supremacy and this reckoning with white privilege. Thank you for your time, your activism, and your humanity. I thank many white people who have joined this fight as well (in my world, mostly white women; we must change this). For us white people, it is way past time to donate, if you can, read, learn, and act. 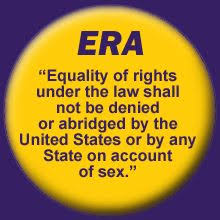 (Here is a letter to the editor I have just submitted to support ratification of the ERA.)

White women got the right to vote in 1920, 133 years after the Constitution was signed in Philadelphia and 129 years after the approval of the Bill of Rights.  African-American women waited even longer, until the Voting Rights Act of 1965.  These plain historical facts reveal to us the multiple gaps left by the Constitution’s framers and the ways in which we must encourage the document to catch up with and to reflect contemporary realities of citizens and citizenship.

The Equal Rights Amendment, a Republican endeavor of the 1970s, is still alive, well, and ready for even more support in the state of Virginia.  Virginia could become the 38th state—the last one necessary—to ratify the ERA, following Illinois (2018) and Nevada (2017).

“Equality of rights under the law shall not be denied or abridged by the United States or any state on account of sex.”  This simple text reminds us that women’s rights are civil rights and that strict scrutiny is needed for gender discrimination cases, as is already the case for race and religion.

84% of the 197 constitutions in the world guarantee gender equality, and all international constitutions since 1950 have included gender equality clauses.  The ERA provides a national standard for the elimination of gender discrimination. In the United States, widespread, bipartisan support for the amendment speaks to the common-sense nature of it.

This is a great time for the United States to step up its game and ensure all citizens equality under the law.  Virginians, let’s do our part!  You can sign local and state petitions in support of the ERA, contact your delegate and the House Leadership every day, visit the General Assembly now or in the future to advocate for the amendment, write to Delegate M. Kirkland Cox, Speaker of the Virginia House, and spread the word to friends and neighbors of the Commonwealth.

At my university last week we celebrated the 45th anniversary of Title IX.  Programming included screenings of a film (“The Battle of the Sexes”) and a documentary (NCAA’s “Sporting Chance”), a poetry reading, a basketball game, a Title IX expert panel, and a visit and talk by Mia Hamm.  The anniversary week was sponsored in large part by the Department of Physical Education, Athletics, and Recreation, as well as by the Women’s, Gender, and Sexuality Studies Program and the student-run Contact Committee.  As a child of Title IX, I was delighted to hear stories about heroes like Bernice Sandler, Edith Green, Birch Bayh, and Billie Jean King.  As a scholar who works with Title IX issues, I was gratified to learn more about how the legislation came about and how it has survived repeated challenges.  Thank you again to all the organizers.

My mother was famous in our little hometown circle for making an unassisted triple play in a softball game.  We kids haven’t been able to piece together each element of her feat, but we are not at all surprised she was capable of it.  The story goes that her little sister made a hook shot from half court in one of her basketball games.  These were the women who had no Title IX, who effected their athletic feats through the sex-segregated Catholic school system that had softball fields and basketball courts for the girls.  Girls of their age at public school were assured no teams, coaches, fields, or equipment to play their sports, and certainly none of these girls and young women could imagine themselves as scholarship student-athletes at the college level.  As we all know now, this separation of resources for boys and girls and men and women has implications not only for athletics, but for life itself—opportunities to challenge ourselves, compete, understand teamwork, be coached and mentored and opportunities to be treated equally in school, be encouraged to study all the subjects, have women and men teachers, be recognized in the media, see an open horizon.

Title IX tells us that: “No person in the United States shall, on the basis of sex, be excluded from participation in, be denied the benefits of, or be subjected to discrimination under any education program or activity receiving Federal financial assistance.”

This short text is a really big deal.  We have seen the changes this legislation has brought for men and women in educational settings and specifically in athletics.  Of course, the legislation has been appropriately elastic in its recognition of other limiting factors for women and transgender individuals in the education context.  Title IX is supposed to offer protection against sexual discrimination, harassment, and retaliation and against sexual violence and abuse for all individuals (all students, staff, faculty in the education workplace).  The extent to which it is allowed to offer these protections can vary from state to state and from United States President to United States President.  (*See this 2017 NPR piece about the North Carolina “bathroom bill” and this 2017 Gender Shrapnel Blog post about the current “president’s” pullback on Title IX protections.)  These protections might also be more precarious depending on gender identity, race, religion, and immigration status, which is why Title IX must work in conjunction with Title VI (protects against discrimination based on race, color, and national origin in federally financed programs) and Title VII of the Civil Rights Act of 1964 (prohibits employers from discriminating on the basis of sex, race, religion, color, national origin).  In other words, as we celebrate the many triumphs of this 1972 legislation, we also have to be wary of the many ways in which interpretation and application of the law can be diminished.

Of course, no laws are enacted or enforced in a cultural vacuum.  Jim Crow laws were both a symptom of and the reinforcement of racial apartheid in the post-Civil War era, while current stop-and-frisk laws demonstrate a greater targeting of people of color.  The expanded Title IX guidance and enforcement under President Obama contrast sharply with the law’s shrinking applications under the current administration, a clear signal that the Groping Old President wishes to roll back protections for women and transgender individuals.

For these reasons and many more, the Title IX anniversary events at my institution both celebrated the advances made since 1972 and advocated for an awareness surrounding the legislation.  I learned a lot last week.  I learned that federal law (not state-by-state) protects against pregnancy discrimination.  I learned from one young man’s significant question to Mia Hamm, when he asked her, “What has been the role of men in fighting for equal pay in women’s sports?”, and when she answered with several examples of men’s sports individuals and teams that have gone to bat on this issue.  I learned that we need more young men asking this same question in all areas of Title VII and Title IX protections.  Legal and cultural change cannot happen without more support from more of the populace.  I learned that Mia Hamm’s accomplishments, intelligence, thoughtfulness, and generosity make her a true champion, a real inspiration.  When asked who her women athlete heroes were, Hamm said that the only women’s sports regularly on television were tennis and, every four years, women’s track and field.  Her two heroes?  Eighteen-time Grand Slam Champion Chris Everett Lloyd in tennis and USA Track and Field Hall of Famer Jackie Joyner-Kersee.  I should say!

In addition, several concepts were reinforced for me.  Our flagging soccer program for girls in our area, commented upon several times last week, is likely a result of the state of Virginia placing girls’ soccer and lacrosse in the same season—the spring—thereby forcing girls’ sports to compete for players.  The same is true, actually, for boys’ soccer and lacrosse, both offered in the spring.  The Title IX issue enters when we account for this crowding of the spring season: might it be because fields are limited, and the football field is protected from having to share with soccer or lacrosse in the fall?  It certainly seems the case that girls have fewer sports opportunities in the fall than they do in the spring and fewer in the fall than the boys do.  Nevertheless, the Virginia Department of Education has scant information on athletics offerings, which also needs to be rectified.  I also believe that LGBTQIA+ individuals at our local schools are under a greater threat of bullying than their straight peers—also a Title IX consideration.

As I’ve said elsewhere in the Gender Shrapnel Blog, the status quo is a mighty force, and we must be wary of its power.