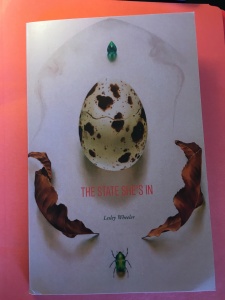 The older I get, the more I need poetry.  I need to read, hear, teach, write, and evangelize about it.  I don’t know if it’s my age, or the years of teaching, or these more than just trying times.  I’m not sure what makes me turn increasingly to volumes of poetry I read years ago and others that are brand new. I don’t know why I’m experiencing verse in a more physical, visceral, emotional way than I used to.  It’s a little bit like a drug at this point, and I need my fix.

Enter Lesley Wheeler’s latest poetry collection, The State She’s In.  Wheeler is a friend and colleague.  We are close to the same age and live in the same state.  And so, in many ways, the state her poetic voice is in is the same state I’m in.  Even with my already very proximate relationship to this collection, the book surprised, delighted, and nourished me at every turn.  I remember a French professor who said imperiously from her high teaching bank at the Sorbonne, “Mais ce livre est fantastique.  C’est un must-read.”  Unfortunate though it may be that I only remember her hilarious look and tone, and not the fantastic book itself, I want to adopt her same posture as I say to you all, glasses at the end of my nose, voice forceful, Wheeler’s book is a must-read.

When I read a single poem, I tend to perform close-reading: reading out loud; listening for rhyme and meter; understanding the flow from stanza to stanza; seeking words and images that repeat; coming to grips with poetic voice; deciding if the poem tends more towards metaphor or metonymy; slowly unraveling the theme.  It’s a delicious savoring of an accomplished writer’s carefully wrought offering.  It is a gift.

When I read a whole collection of poetry, I read it like a novel.  The collection’s sections are chapters, the titles an invitation to keep moving.  The poetic voice, so different from poem to poem or section to section, becomes like a shifting narrator, guiding me through the collection and giving an overall impression of its contents.  I end up sensing the overall coherence of the work, the logic of the poet (and her editor) as she edits and compiles works drafted over time.  When I finish the collection, I can almost narrate what happened, as if I had just read a plot-driven work.

This is not really how poetry should be read, and so I always go back to read the collection again—usually not in order.  I pick poems and reread them, close-read them, seeking the lyricism, solace, humor—the focus I would normally lend to a single poem.

Last Thursday, I devoured Wheeler’s fifth poetry collection like I would a gripping novel.  When I finished, I sat with the flow of blood, assonance, and indignation that marked the collection for me.  I loved that each section was titled “Ambitions,” allowing the reader to think of the many ways—semantic, semiotic, musical—in which this word can map meaning. The poems that treat racial history, which in this state is also the racist present, are centered in the second “Ambitions” section and include “Blue Ridge,” “American Incognitum,” and the “Unremembered settlements” series, which disappears right before the reader’s eyes, effectively de-mapping the settlements of the Algonquians and Iroquois who lived in this state before it was a state.  “John Robinson’s List, 1826” considers the enslaved persons owned by Lexington resident John Robinson. “Some of the entries hint at stories. Creasy, / 68, twenty dollars, but the note, / in a column usually blank, offers a hard ‘worth / nothing.’ The cursive relaxed but well-groomed.” The insistent enjambment moves the reader forcefully from real person to half-bared truth—the buying and selling of human beings, and the multiple erasures of their stories.  Wheeler imagines lost stories without stealing voice, a feat she masters through careful archival work and an earned frustration with the state of race and gender where she lives.

Many of Wheeler’s poems present the blood of erased peoples, the reality of invisible people, the frustration and indignation of collective existence snuffed out.  It is no accident that many of the poems in the third “Ambitions” section are dated 2016.  Together, these poems decry the ever-increasing power of an-almost president who, down the line, would be impeached.  “Bleeding on the street’s not too good for her, / thinks forty-plus percent of my broken / country. The liar calls her liar and the smear / sticks. After all, horror’s ordinary.  The thirteen-/year-old boy just killed for holding a BB gun. / An an open-mouthed woman—well, blood’s her career” (“Inside Out”).  The blood of racial violence and the blood of the vagina dentata, presumed mysterious, dangerous, and unworthy.  In “Inappropriate,” Wheeler writes, “…Just her bad / inhospitable secret vagina, delivering plans. / Can’t see what she’s got up there’s / what they can’t stand.”

The poet weaves these themes through artfully wrought poetic forms, with evocations of the natural world reminding the reader to breathe—to activate the senses in order to sort through the themes (to experience the meshing of forma y fondo [form and meaning]).  Wheeler writes with an urgency about pain and passages as she considers collective metamorphosis and personal, intimate transitions.  I was particularly moved by “Pushing Toward the Canopy,” which appears towards the end of the collection.  The allusions to trees, branches and leaves, and then to “water, water” are gently astounding and combine with the profound “I” of the poem, who asks at the end, “What do I want, if not dirt and rain / and friends who turn to me and wave?”  As does the whole collection, this poem communicates both vulnerability and power, and, for those of us living decades in small towns, it reminds us of the intensity of union and disjuncture as life unfolds, as we “push towards the canopy.”

I loved this collection in part because it recalled the interstices of anger and frustration of my joints and tissues.  It reminded me of political outcry and resistance and of gentle community-building—the to-and-fro of denouncing evil-doing and attempting to model something like radical love.  C’est un must-read.