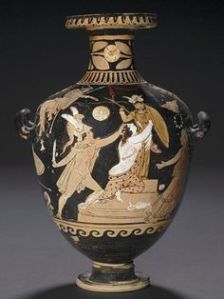 The Greek myth of Cassandra tells us of a girl who has the power of prophecy.  As an adult, Cassandra is propositioned by Apollo, who, when rebuffed by Cassandra, curses her power of prophecy by ensuring she will never again be believed.  The myth recounts that Cassandra was later raped by Ajax, given to Agamemnon as a sex slave (they say “concubine,” but what’s the difference?), and then murdered by Agamemnon’s wife Clytemnestra.  Of course, Greek mythology overflows with stories of power and revenge, and, generally, women do not fare well.

What are the takeaways here?  I can discern a few:

Cassandra must have been so frustrated and exhausted.  She could anticipate what was going to happen, and she spent her childhood successfully communicating her prophecies. When Apollo cast the spell that would have her never believed, people saw her as an exaggerator and a liar, as “unstable.”

We should note, too, that there are different versions of this myth.  One even blames Cassandra for tricking Apollo into coming onto her, spurning him, and then being cursed by him.  In this version, I imagine Cassandra in the short skirt, showing that it’s all her fault after all. Cassandra is also cast as a victim of her own beauty, another Western narrative thread that blames women for the violence enacted against them.

The #metoo explosion of these past ten days has been harnessed in powerful ways—to raise awareness of the pervasiveness of the problems of sexual harassment and sexual assault and to give texture and meaning to the tens of thousands of incidents recounted or partially recounted across social media.  I have seen many of the accounts, warnings, and memes translated into Spanish and Portuguese (and some told anew in these languages) in order to address a broader swath of the globe.  As I have said in the blog posts of the last several weeks, the patterns are predictable.  Any old Cassandra can and does foretell the events.  Somehow, though, the curse of not being believed continues, and oftentimes Cassandra’s character is called more into question than is that of her harassers and rapists.  Participating in the #metoo accounting and recounting requires daring precisely because those who come forward aren’t believed and are punished.  I fiercely hope that this latest wave of #metoo (this time jumpstarted by Alyssa Milano, but ten years ago initiated by activist Tarana Burke) makes a difference, effects change.  Nevertheless, I always have in mind Emma Sulkowicz, the woman who carried her mattress around Columbia University for two and a half years.  The mattress was the truth, and yet its constant weight and presence in public spaces still didn’t convince university officials that more needed to be done.  I firmly believe that people don’t go on this type of difficult, long-term mission without cause.  Let’s believe the women carrying mattresses.  Let’s understand Cassandra.

#metoo has also given men the opportunity to absorb the everyday realities for women of all races and members of the LGBTQIA+ community around them.  Maybe some men have read the threads and then performed an audit of their own behaviors through their lives.  When did they use less than kind language about women and people who identify as LGBTQIA+?  When did they offer someone else’s idea as their own?  When did they speak over women at a meeting?  When did they neglect to hire a woman because it would prove a pain in the ass to have to curb certain workplace behaviors?  When did they press for sex when they knew the insistence was unwelcome?  Did they ever rape someone (remember, this might mean that they had sex with someone without their consent and/or with a definitive “no”)?  Do the audit.  Admit wrongdoing. Understand harm.  Make reparations by thinking through actions and statements, by hiring people unlike you, by learning from those who are unlike you, by expressing sincere kindness and care.  Oh yeah, and by stopping telling women that you have a mother, wife, or daughter, and so you understand the plight.  Also, read this excellent Roxanne Gay opinion piece in The New York Times.

Years ago, a colleague told me he’d better watch what he says around me.  I remember thinking, well, I’ve become that person, but, okay, good.  Maybe he’ll start to watch what he says around others, too, and even come to understand why his statements are offensive and threatening.  I thought, maybe this person is more aware now and will help to create a better environment.  The same goes for me in terms of listening, reading, and understanding more about race-based oppression.  I cannot imagine how absolutely fatiguing it must be for women of color and/or LGBTQIA+ people of color who are constantly dealing with gender oppression and race oppression.

I’ve been wondering how well we teach our students and children to analyze the daily bombardment of messages that is our life.  How much do we all absorb advertisements, television programs, movies, music, and social media messages that represent people of color most often in negative contexts, women most often as acquiescent (pussies will be grabbed) or abnegating (wombs will be filled), and heterosexual white men as the all-powerful?  I would say the onslaught is constant, even for someone like me who purposefully avoids a barrage of sad- and crazy-making oppression.  That’s why Hidden Figures (book and movie) was an actual relief and why I was confounded to like and feel a rush from the movie “Wonder Woman.” At my age, I have read many, many books that are empowering for women (but not enough that are empowering for women of color or for LGBTQIA+ individuals), but watching “Hidden Figures” and “Wonder Woman” provided an unexpected rush, an oh-yeah-I-will-crush-you-with-my-freaking-brainpower-and-strength.  “Crushing,” gaining power over, and winning are not my usual touchstones, but I have to confess that these films reminded me how accustomed I’ve become to observing, over and over again for decades, people of color and women being crushed, violated, underrepresented, or not represented at all.  A little reminder of what power is and how it can be distributed more equitably across people and groups proved useful.

If I could draw, I would constantly be doing one-to-four block cartoons that point out the daily reductions of our humanity.  If I could sing, I would go on YouTube and undo sexist lyrics just to own them.  I’m thinking of Eminem, whose lyrics I refuse to quote, or far more innocent, but still insanely misogynistic, songs that are so catchy and so deeply sexist.  If I were Jessica Williams or Tina Fey, I would crack wise all the time to make my point.  But what I’ve got in my toolkit is a Cassandra awareness with an Eeyore delivery.  I’ve got my books, theories, experiences, warnings, and words, and I use them.  What have you got? In particular, how can you men out there contribute productively to this conversation?  Whatever it is, bring it on, ‘cause we need your talent and creativity to change our cultures’ oppressive ways.

The Gender Shrapnel Blog has featured questions like this for over a year, but I continue to ask:  What does it mean to have others appreciate our full humanity?  Has the current administration politicized even kindness?  How do we describe the world/country/city/town we want to live in?  How do we move closer to this better way of living?  Cassandra is justifiably impatient, and Eeyore rightly shows his gloom.