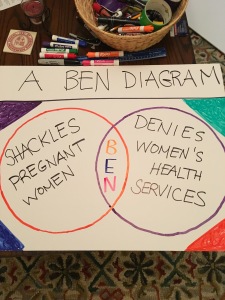 For this week’s post, I am sharing a version of the letter to the editor that I have just written for our local newspaper, The News-Gazette (Lexington, VA), along with some additional comments about Ben Cline’s town hall meeting, held last month in Buena Vista, VA.  For those of you who are reading from outside the Virginia 24th or the Federal 6th District, you might want to re-read this Gender Shrapnel Blog post from last March.  Please note, too, that Ben Cline has declared his intention to run for Congressman Bob Goodlatte’s U.S. House of Representatives seat, which conservative, deaf-to-his-constituents-Goodlatte  has held since…wait for it…1992.

There was already cause for concern that Ben Cline has been elected to the Virginia House of Delegates for an eighth term, but Lexington and Rockbridge County voters should be even more alarmed now that Cline plans to make a bid for the United States House of Representatives. That’s right, the person who claims on his website to be “cleaning up the political cronyism that grips our system” hopes to be anointed Goodlatte’s successor in November.  Let’s not allow that to happen.

In 2009, the American Civil Liberties Union (ACLU) won an historic decision in the case of an Arkansas woman who was shackled to her hospital bed while in labor in 2003. The woman was a non-violent offender but was shackled throughout her labor.  When the ACLU won this case, one of the organization’s representatives rightly stated, “Today’s decision reaffirms that pregnant women in prison do not lose their right to safe and humane treatment.”  The decision reaffirms that women are human beings and, as such, have the right to safe treatment.  At that point, groups from various points along the political spectrum, along with over a dozen non-partisan health organizations, celebrated this decision.

In 2012, Ben Cline, of the Virginia House of Delegates, supported the shackling of pregnant inmates, despite evidence that such barbaric practices caused injury to the babies born in these conditions.  In her Letter to the Editor of The News-Gazette (12-13-2017), Ann Huebner rightly links Cline’s shackling stance to his support of medically unnecessary trans-vaginal ultrasounds, his sponsorship of a personhood bill that “would have the potential to outlaw in-vitro fertilization and certain types of birth control, as well as force rape and incest victims (even young teenagers) to bear children.”  Huebner also correctly recalled Cline’s inhumane “Day of Tears” resolution of 2017.

The scant information offered on Ben Cline’s website tells us that, “Ben Cline’s values were shaped growing up right here in the Shenandoah Valley” (italics his), and that Ben never fails “to champion common sense, conservative legislation that challenge[d] the liberal orthodoxy of several sitting Democratic Governors.”  As voters in this area, we cannot possibly link Cline’s support of torturous shackling to “common sense, conservative legislation.”  Shackling pregnant women and women in labor should go against anyone’s values, especially those who impose their “family values” on their constituents.

(*Visit this link to Ann Huebner’s guest blog post (2012) about Ben Cline’s support of shackling pregnant women and his double-speak about that support.)

The 350-word limit on letters to the editor means that I didn’t address in the above missive Ben Cline’s town hall meeting, held on December 19, 2017. In January of 2017, Cline held a town hall meeting in now perennially blue Lexington, Virginia.  Many of us here praised Cline for being accessible to all his constituents and for being willing to meet “across the aisle.” His move less than one year later to perennially red Buena Vista, Virginia, just six miles down the road, signals more Goodlatte-like tactics: disappearance from view from any constituents who might dissent; movement to more conservative meeting places; limiting full conversation and expression of a range of views.  By November, 2018, we will have had 26 years of Goodlatte’s fat-cat, me-first, damn-the-rest strategies in the Sixth District.  Ben Cline seems to be following in Goodlatte’s selfish and morally bankrupt footsteps.

We should look carefully at Ben Cline’s website, which expresses this kind of pride: “Ben’s efforts have earned him the American Conservative Union’s (ACU)  “Conservative Excellence Award” as well as top ratings from leading conservative groups like the VA Tea Party Patriot Federation, the Virginia Family Foundation and an A+ rating from the NRA.”  The “A+ rating from the NRA” seems problematic for an area that witnessed a decade ago the deadliest campus shooting in the history of the United States (Virginia Tech, April 16, 2007).

Approximately 65 people attended Ben Cline’s Buena Vista town hall meeting, held in an office of Buena Vista Public Schools.  The public school’s hall included a room to meet and seemed to boast also an extremely large weight room—for whom and for what purposes, I don’t know.  There was a group of boy scouts at the town hall.  They were attentive, and some were even taking notes.  There were concerned citizens from the Buena Vista, Lexington, and Rockbridge areas.  Issues raised included gerrymandering, education and, especially, teacher pay, healthcare and Medicaid, law enforcement, and job and business development.  Cline insisted that he is strong on deregulation, that he wants to remove governmental control from private citizens’ business.  When I asked him if this hands-off approach applied as well to reproductive rights, Cline sighed, and said, “I am pro-life.”

This individualistic, church-IN-government, theocratic, and controlling stance says it all.  Cline is pro-life but is uniquely interested in shackling pregnant women and women in labor and causing harm to newborns.  He is pro-life but is keenly proud of being sponsored by the National Rifle Association, a lobbying organization that boasted of its surge in membership following the Sandy Hook massacre in December of 2012. (*See statistics on gun violence in the United States through the BBC [2015]; NPR [2017]; CNN [2017]; The New York Times [2017]).  He is pro-life but willing to sacrifice necessary healthcare for the people he represents.  He is pro-life but believes that poorly-paid public school teachers should just keep doing their work “for the passion of it.”  He is pro-life but anti-real people.

Many people like Ben because he seems to be a pleasant, God-fearing, middle-aged white man.  This misguided affinity should lead us to read Cline’s website, which codes him as Goodlatte- and Trump-like, communicates very little real policy information to his information-hungry constituents, and makes the assumption that former Goodlatte staffers like himself will simply accede to the next rung of the ladder, the next bit of power, the next opportunity to ignore the wants and needs of the people he represents.

I can’t think of a moment in which we more urgently need to discard shackles and embrace a variety of views, values, wants, and needs.

(I like feline fat cats, but not human ones.)