(Claviers on the left; Paris on the right.  Photos by E. Mayock)

Four or five weeks have passed since I last posted in the Gender Shrapnel Blog.  This represents a big shift away from posting entries every week for 97 weeks in a row.  The reasons for blog idleness are several: continued work with our local resistance group; more pressing summer projects; and family vacation.  Like so many other people, I felt the need to stop pointing to the top of my forehead and saying, “I’m boiling mad up to here.  I’m constantly mad.  When will it stop?”  I feel rusty on the blogging and slow of brain, and at the same time incredibly fortunate to have had a change of pace in the summer and a long-awaited family vacation in France.  Of course, gender bias never goes on vacation.  It does not even enjoy a free weekend here or there.  While the Gender Shrapnel Blog focuses on gender and its intersections in a mostly United States context, entries do occasionally treat questions of international feminism, especially of Spain and Latin America.  After two weeks in France, I will share here a few observations about gender in everyday life and in art.

Several decades ago, I was an undergraduate major in French and Spanish.  For a while, I communicated far better in French than I did in Spanish, but that has not been the case for over two decades.  Revving my French back up while traveling with a mostly monolingual group of family members both challenged and amused me, especially because I have never spent much time in France, and almost none in the south of France.  We spent nine or ten days in a stunning “perched village” of the Alps region above the Riviera, in a town called Claviers (see photo above), which not one French person in Paris with whom I spoke had heard of.  Due to the vacation home rental craze, the town’s 700 inhabitants are accustomed to tourists and absorb them, for short or long stays, in what seems an understated, no-fuss manner.  Most Parisians asked how I understood southern French—saying that the accent was hard enough for them to understand.  Suffice it to say that I managed quite well during our time away, but that my French skills are still far from where they used to be.  Maybe take my observations about gender in France with a giant grain of salt, especially given the short stay and the impressionistic approach I had to take.

Claviers’ main square, also its only square, featured two restaurants, a press office, a real estate agency, and the ever-important “mairie,” or mayor’s office/city hall.  The small Proxy market was right off the square and served as 7-Eleven and lovely little boulangerie all at once.  Slow mornings revealed women sweeping, serving café au lait, and bustling to and from the main square, straw baskets or market caddies in tow, to get the day’s provisions.  Men drove city clean-up vehicles through the narrow streets and opened up the sole bar/café, while one very important man strolled through town shaking hands and answering questions.  That was the Mayor of Claviers, whose posted office hours at the Mairie seemed to indicate a cushy and, if the list of all the town’s mayors through history was any indication, inherited job.  Some of the mayors had 35-year terms. All of the Claviers mayors have been men.  The front office is staffed by a young woman, who seems to run interference for her glad-handing boss.  Remember, these are just impressionistic, meandering observations of a tiny town.

Tuesday morning surprised us because the mobile hair salon arrived.  We all imagined that one special day a month when everyone went around telling everyone else how fabulous their hair looked.  I should not have been surprised that mid-afternoon heat brought on a Spanish-style siesta, with most people returning home for a meal and most businesses closing their shutters from the sun and the out-of-sync tourists.  Slightly busier evenings brought out the restaurant workers—some men, some women, some black, some white—all bustling and some bristling.  Conservation seemed a priority in both the small towns and in Paris, as the mairies placed limits on the number of bags of garbage and recycling people could discard a week, the grocery stores had the reusable bag system down to a science, diesel gas fueled the cars, and people rode bicycles as a matter-of-fact means of transportation.  I was particularly impressed by the Paris share-a-bicycle system and its reliable bicycle lanes throughout the city.   The many cyclists on the mountain roads in the south of France also amazed.  It is no wonder the Tour de France has the fame it does.

Gender norms in beautiful and charming Claviers seemed to parallel those of other worlds.  Women both worked hard and were in charge of the children, and men worked hard and were in charge of improving their pétanque game.  Every one of the small towns we saw featured a pétanque court, where men and boys of all ages rolled small silver bowling balls in this traditional French game.  Sometimes the women stopped to watch, but mostly the men occupied these spaces.  I report all of this with little to no judgment, just as an observation.  Right by the pétanque court in Claviers (see photo below of the court in nearby Fayence) are a building with the classic Liberté-Egalité-Fraternité slogan (photo below), a bar called Le Cercle de Fraternité, and a statue to the local men who fought in the French Resistance.  The statue, pictured below, is simple—a naked woman carved in white stone to symbolize, as the statue indicates in one word, liberté.  Of course, I have long been familiar with the trope of naked woman as liberty (it pervades much of Western European and North American art), but I decided at that moment to reject this millennia-old trope.  I decided I had had enough of naked women, sculpted or painted by men, given no name or identity, representing some concept of male liberty, placed in town square after town square, and here placed between the pétanque court and the “Fraternity” bar.  For whom is this liberty represented?  And, how sick are we of white women representing some male concept of purity (and the implied converse representation, the supposed impurity of women of color)?  Where are artistic representations of named women, and where are the women and men of color?  As I chewed on all of this out loud, my 17-year-old son smiled, recognizing that his mother can be what the wonderful Sara Ahmed calls a “feminist killjoy,” even on a lovely vacation. 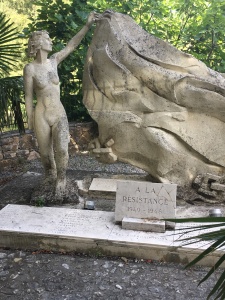 (Statue of “Liberté” in Claviers. Photo by C. Mayock-Bradley)

Paris’ amazing collection of museums—such a treat, even for a feminist killjoy—reminds us again how the art world pitches men as the doers (the actual artists, but also the figures of agency, such as fishermen, farmers, kings, politicians, popes, and cardinals) and women as muses to the men.  See, for example, a photo of Rodin’s “The Thinker,” below.  In fact, my daughter and her cousin, both wholly uninterested in museum visits, kept themselves busy by counting women’s naked breasts (featured in paintings and sculptures as nurturing, liberating, or torturing).  After just a few days of trampling around museums, they counted 365 breasts.  Don’t worry about the odd number; you know how those statues and sculptures go. The classic art museums—the most visited art museums of the western world—remind us and reinforce for us the dominant position of men yesterday and today.  As Ahmed has said in Living a Feminist Life, “A decision made in the present about the future (under the promissory sign “we will”) can be overridden by the momentum of the past.”  These museums, gigantic, impressive, well-funded, represent such unbelievable momentum of the past that they surely influence how we view men and women, colonizers and colonized, white and black and brown, wealthy and impoverished.  Painting after painting after painting reinforces these tropes for us, making sustained systems of power and the continued representation of these systems seem somehow natural.  It takes a lot of thought and deliberate action to undo the repetition of such seemingly seductive images and expectations.

That is why I loved observing that some forward-looking Paris city planner placed statues of real French women—mostly queens and saints, but they were real women—throughout the Luxembourg Gardens.  None of the statues I saw represented women of color or women of lesser means, but at least they acknowledged the existence and representation of some women before the 20th century.  In addition, I was gratified to see throngs of people at the chapels of Saint Paul Chen and La Virgen de Guadalupe at the Notre Dame Cathedral.  People and groups clearly wanted to see their nations and cultures represented in this most iconic of Parisian sites (and, as we learned on a tour, the most visited tourist site in all of Europe).

As you can see, feminist killjoys never take a vacation from observations of gender, race, and religion.  The ones I have offered here are neither profound nor surprising, but they are worth pointing out.  As Ahmed has said, “Rolling eyes=feminist pedagogy.”

Over the next few weeks, I will probably write about armed guards and their treatment of pedestrians and travelers, fashion impositions and arguments, sports stores and how they mark gender and race, and what we can expect from next year’s World Cup soccer tournament in France.  (Note that 2018 World Cup is called “World Cup” and that 2019 World Cup is called “Women’s World Cup.”  Sigh.)