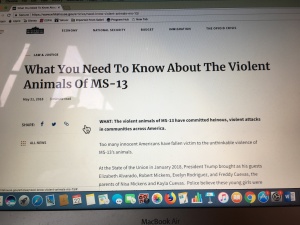 Commencement, the old idea that the end is not the end but a new beginning, delivers pomp and circumstance (the actual song and the ceremony), folding chairs, speakers’ platforms, honorary degrees, family lunches, sweaty black robes, grandparents seeking refuge from humidity, diplomas and brief swaggers on stage, caps tossed in the air, reminiscence, recognition, encouragement, celebration.   In a way, this ritual is a collective Bar or Bat Mitzvah in its excited anticipation of the people these youngsters have become and the older adults they will be.  Commencement is excitement, hope, and love.

This year I will attend our university’s baccalaureate service, a special ceremony for some of the seniors, the formal graduation, my daughter’s 8th-grade graduation, and the high-school graduation of dear friends.  That is a lot of commencing packed into three short days, and I’m looking forward to it, in no small part because I am so happy for these people and glad for their next adventures.  When I was younger, I thought rituals rather silly; the predictable garb, incantations, and seasonal speeches seemed to pale in comparison to simply being with the people you loved and wanted to celebrate.  My brother-in-law once reminded me that people need rituals in order to acknowledge beginnings and endings, to come together as a community, to observe the different ways in which time passes.  He is right.  These rituals allow us to tell each other of the respect we feel for one another.  They underscore human dignity and, when done right, also nudge us towards indignation in the face of injustice.  Simply put, injustice erases human dignity; it tells us that some humans are more worthy than others.  Commencement should remind us that we have learned otherwise.

While the United States continues to allow, and too often to condone, the killing of black people, the country also sees the smaller indignities, or reductions of worthiness, in the acts of white people calling the police on black people and the police responding to these racist and frivolous calls.  These daily indignities are the everyday bits of proof of the gigantic problem of assassination and incarceration of people of color, a problem exposed through film, fiction, academic studies, and activist organizations, including, but not limited to, Black Lives Matter.  (*See this Gender Shrapnel Blog post on rarity and reporting and this one on Black Lives Matter.)  We as a nation ignore these everyday occurrences at our peril, as they must form a part of our reckoning with racial injustice and our solutions to these profound problems of humanity, worth, and dignity.

Some of you may have seen the White House website’s piece on MS-13 gang members and activity.  (See the horrifyingly official headline in the photo above.) Robin Alperstein’s upcoming article in Dame Magazine will treat this issue, and E.J. Dionne of The Washington Post addresses it here.  I therefore just want to mention the MS-13 piece in the context of dignity.  Calling certain groups of people “animals” does us all a disservice.  The person who uses the term diminishes the humanity of the person being addressed, her or his own humanity, and that of all of us.  (Of course, too, this derogatory term assumes a less than harmonious relationship with the flora and fauna that make up our world.)  Ass, bitch, chicken, cow, pig, pussy, rat, shrimp, snake—when we use these animal terms against people—we are understanding those people to be less human than ourselves.  Now, let’s return to the main point:  the so-called president of the United States chooses to use this language on the official website of his office—of our nation–, thereby representing us to the world in this demeaning, demoralizing, dehumanizing way.

The website text recounts atrocious acts and attacks of Mara Salvatrucha, a large transnational gang known for its violent campaigns.  The end of the piece states, “President Trump’s entire Administration is working tirelessly to bring these violent animals to justice.”  This jarring us/them, human/animal, superior/inferior, worthy/unworthy language attempts to establish the Trump administration as morally superior saviors, at best a laughable position and, at worst, an example of generalizing, xenophobic, and violent rhetoric directed at all Latinxs.  Dionne takes on the dignity question in this way: “But both of these innocent explanations underestimate Trump’s gift for using incendiary words that send clear messages to his supporters. He is brutally calculating in finding ways of casting large groups of people as undeserving of dignity. Dehumanizing those he and his core constituents see as radically different is central to Trump’s project.”  I shudder to think about the words of wisdom this megalomaniac narcissist will offer to the students graduating from the United States Naval Academy on Friday.

The “president,”—Groping Old President, paper-towel thrower, wall-builder, dictator-lover, cheater, liar, stealer, colluding election-grabber—clearly not the best choice to lead a diverse and complex nation, is also not the ideal person to express to a large group of 22-year-olds that they can choose dignity, express indignation in the face of social injustice, and commence a much-needed wave of change in a country struggling to hold onto any shred of humanity. 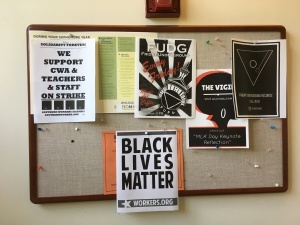 (Bulletin board at the university where I teach.  Much kinder than the White House website.)

One thought on “Dignity and Indignation”